Before attempting this mission it is advisable to train up the team more than for the previous missions put together: leveling up all flying units (useful for the first part of the mission) and, in particular, getting Grotius's hp to around 65, leveling up Niven's attacks so that his Fling deals 30-40 damage, generally leveling up all teammates to have around 45-55 hp, leveling up all teammates to deal around 15-20 damage, it is also crucial to get Shadow Resistance to all teammates that can get it (all Shadowlings, except for Niven). Training up the Hero to have Vengeance and have high hp (around 50) could come in very handy, as well as having the Green Orb(gives a boost to speed). After completing mission 5, Tastidian will send you to rescue General Darkeye, who is stranded on an island in the centre of Lake Alto. Go to Lake Alto and it might be a good idea to talk to Pirate Pete before continuing with the mission. You'll see a boat there: go to the Psy Boat and your first task will be to take it back from Spriggat control.

Battle One: defend the boat[]

This battle can be done without too much leveling up beforehand. One way is to send your Shadowlings and attack the leftmost Spriggat formation using Shadowboxer's area attack, whilst using other Shadowlings to bring down the left-most Frost Spriggat. Next, bring up the Hero to the centre of the ship, but keep him out of the battle for now. Next, use the remaining teammates to engage in battle the two Spriggats on the right hand side of the map, it might be a good idea to draw them closer to the shore, so that more teammates can attack them and maybe enlist Niven's and Grotius' help in the process (if you leveled up Grorius enough, then he'll have Frost Shield- use it on other teammates when time allows to give them Cold Resistance, as this will lower the damage from Frost Spriggat attacks by half). Use Festus to heal, if necessary, and then concentrate on taking down the Healer, whilst making sure not to attack the other Spriggat, as it will cause the Healer to cast a Big Shield, and that will also automatically self-heal the Healer Spriggat as well. Send the Hero into battle, along with others, and the Healer shall fall in one turn (make sure you position the Shadowlings in such a way as to allow the Hero a clear shot at the Healer). Meanwhile, on the other side of the map, try to gang up on one of the Spriggats first, before taking out the other and retreat any wounded units, unless you have a second healer on your team (not counting the Hero). Finally, gang up the Shadowlings and the Hero on the last Spriggat left of the initial enemy trio and kill him (at this point, sending Festus to help out the remaining teammates on the right might be a good idea if they took a heavy beating). Finally, finish the last Spriggat on the right side of the map and the boat is yours.

Get onto the boat and set course to the left, moving along the shore. You'll end up facing a mine-field. Approach it and then keep moving north until you see a breach in the field and what looks like another shore with a docking area- take your time and move your boat there, dock and disembark. You've reached Gen. Darkeye's island! Along the way you might meet an enemy patrol, and you'll have to fight on board the boat. There are several enemy formations to tackle, all made up of Frost and Red Spriggat. A general tip is to use area attacks and gang up on one or two Spriggats from the beginning and kill them, then concentrate on the Healer, and finally split up and kill the remaining spriggats. Having all of the flying teammates available active on the rooster can greatly help manoeuvrability during these encounters.

Once on the island, proceed into the cave and you'll meet Gen. Darkeye, wounded and retreating with his army. The problem now is that the Spriggats find the cave and attack your formation, thus you'll have to defend yourself and your teammates. Take a note that three battles consequtive battles will follow, so try your best to not lose any teammates in the first two battles! The strategy for the first two battles is more or less the same: wait one or two turns for the Spriggats to come into a closer formation and closer to you (meanwhile discreetly move the Shadowlings along the right edge of the map upwards), then use your Shadowlings to attack the Spriggat formation from the right side, Dark Vortex could come in handy, as well as Niven's Fling. Next, bring up the Hero and one or two other teammates to the right of the stone and use area attacks or any single powerful attacks to deal as much damage to the formation as possible. Meanwhile, use one teammate to draw off the left-most one or two Spriggats and, at the same time, move Gen. Darkeye to the right-bottom corner of the map. If you've trained up enough, your first attack should kill one or two Spriggats and significantly weaken several others, so that even after being Healed, they won't be completely healthy. Next, depending who you have on your team and in what order, try either killing or separating the Healers from the rest of the pack (something simple as standing between them and their targets could work), and whist you're doing that, use the remaining teammates to draw off the Spriggats. Gang up and kill off one Spriggat at a time,and don't forget to keep healing any severly wounded teammates. On the left side of the map, it might be a good idea to send a teammate or two to help the lone straggler (it would be easier if that is Grotius) defeat the one/two Spriggats he/she cut off from the very beginning. Finally, after several turns, you should be left with one or two almost dead spriggats, who should not pose a problem to finish. One thing to watch out for is that Spriggats use 1-2 range attacks, so hiding a critically wounded teammate behind another will not work in this case.But Gen. Darkeye (while he's wounded)is a strong shadowling.

Finally, Cerzak himself arrives at the scene and after a short verbal communication, you'll have to defend yourself and your team from his wrath. The objective of this battle is to defeat Cerzak, along with his two Dark Spriggat minions. There are several things to watch out for: the Dark Spriggats deal 15 damage, whilst Cerzak deals a whopping 20 (that means that he'll kill Gen. Darkeye in 2 shots, Darkeye has Shadow Resistance :-D); the Dark Breath attack has range 1-3 and a nasty side effect of decreasing speed by 1 (down to a minimum of 2 steps per turn!) of any teammate, unless they have Shadow Resistance; Cerzak recuperates about 10 health each turn. Thus, one way around this battle is to start off exactly as before, but this time round concentrate your first attack on the three Frost Spriggats, then proceed to draw out the two Dark Spriggat minions, whilst keeping away from Cerzak and keeping the Red Spriggat Healers at bay. Thus, start off as usual, with the Shadowlings attacking two Frost Spriggats and a Dark Spriggat from the right side (make sure to not place any units in direct line with Cerzak), then use the Hero's Pyro Hail to add more damage to that, whilst from the other side of the rock, let Grotius make a very big detour, and attack the left Dark Spriggat with Frost Breath 2 (this will draw off the Dark Spriggat) and use any remaining teammates to attack the left Frost Spriggat from the bottom. During the next turns, reposition your teammates such as to avoid being hit by Cerzak, and at the same time getting rid of the Frost Spriggats. Keep moving Gen. Darkeye away from the action, if Cerzak follows, place a teammate on his way, if need be. Next, Grotius should be leveled up just enough to survive and kill the left Dark Spriggat, whilst taking all teammates and ganging up on the right Dark Spriggat should bring him down fairly quickly too. Now, Darkling can occupy the Healers at the top of the map by physically blocking the way and by injuring one of them so that the other heals his comrade. Finally, disperse all teammates,if possible, so that you can heal them far away from the reaches of Cerzak. If you, however, have several units that cannot run away from Cerzak, then Festus' Big Shield should be of great use, and then it would be up to the second healer or the Hero to heal up any other wounded teammates, who are still fast enough to escape from Cerzak. Next, surround Cerzak with all units (whilst keeping Gen. Darkeye far away) available and attack with full strength. To make it easier, position units with strongest attack behind Cerzak to use backstab bonus to the max. After winning the battle by knocking out Cerzak, you'll have the option of killing him (and Grotius, as he'll stick up for his Dad) or showing mercy. Truthfully, you don't gain anything from being merciless- morale and ethics notwithstanding, you lose fighting slots (through losing personality points) and you lose a valuable teammate. After making your decision, you exit the cave and face one of the most challenging non-battle tasks in the entire mission set.

Part 6: Flee the island before the enemy finds you![]

In the last part, you'll have to escape the island in your boat whilst navigating your way through a newly-placed extensive minefield. You're also timed, and some paths are pretty narrow, so keeping your head cool and trying to stick to a mine "wall" and try to make your way out would be a good idea. For those of you having trouble with this part of the mission, here is a map of the Lake:

When you disembark at the dock, go to Somnus to receieve your final assignment f 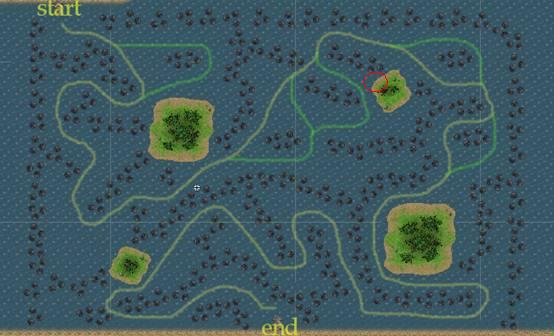 Note:if your boat explodes theres a chance that the autosave will land you in somnus,therefore saving you from navigating the maze.

Community content is available under CC-BY-SA unless otherwise noted.
Advertisement