Once you have completed mission 1, you will get a new mission, which is quite simple: attack the Mechanics' Base and capture the plans. The enemies in this mission are more difficult and numerous, so you should try training first. Talk to the shadowling with a bone mask, and he will train you. Also, you can aquire a new member for your team: Niven. He is a knifethrower, and is quite a useful unit. Once you think you've trained enough, you can talk to Tastidian and click on the Lowlands on the map. Below are some ways to beat the battles in the Mechanics' Base.

Battle One: Busting into the Base[edit | edit source]

This battle will be much easier if you proceed cautiously, keeping battlefield obstacles between yourself and the bulk of the enemy. First, take down the two swordsmen on the left side of the pond. Your next priority should be to kill the Crossbowman and the Stone Golem immediately to your right. Use your Shadowlings to pin down the crossbowman; Gamblin' Jack, supported by Festus, should be more than a match for the Stone Golem. Once those units are out of the way, the rest of the battle should be simple--just make sure to heal your injured units so the remaining swordsmen can't pick them off. 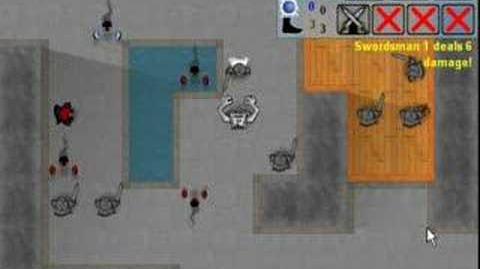 Rule number one of this battle: DO NOT leave your units anywhere in a straight line from the Energy Golem (the weird gray thing with the spinning red orbs). Rule number two of this battle: proceed slowly. The boss and his minions are content to stay right where they are at the bottom of the screen, so long as you don't venture too close. Pick off the enemy in waves. The first wave, consisting of two or three units, will come at you right from the beginning. The next will attack once your hero ventures south of the table. The last, consisting of the boss and his Stone Golems, will attack once you wander within three squares of the boss. (Needless to say, you shouldn't trigger the last wave until you've rested and healed.)

The boss himself is tough, but if you gang up on him, he shouldn't last more than two turns. Once he's gone, take down the Stone Golems, then the Energy Golem. 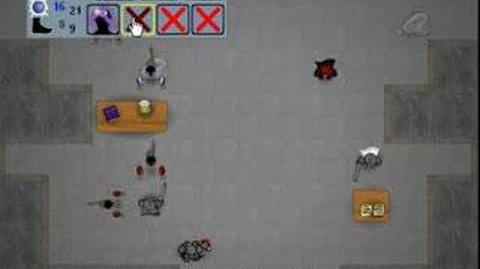 If you are playing on the Sinister Design version of the game, once you win the battles, you are in the base. Take the plans, which are on a table, and also bring Dorgon with you, as he can be a valuable asset to your team.

Retrieved from "https://telepath.fandom.com/wiki/TRPG2_Mission_2?oldid=16011"
Community content is available under CC-BY-SA unless otherwise noted.