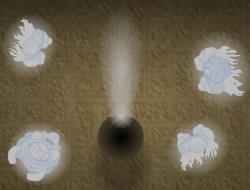 A Spirit is a mysterious being that has great control over raw psy energy.

Most spirits tend to possess a few, vague memories of a former life as a human. Spirits treasure these memories because it gives them a sense of self and purpose. Most spirits are obsessed with remembering their name from their supposed human life, and they whisper their names to themselves over and over, so that they will never forget it. If a spirit ever forgets its name, then it will lose all of its memories and become a Jinn. When a spirits becomes a Jinn, they become more violent and often possess inanimate objects.

Spirits are normally invisible to the other races. There only two ways that a spirit can be seen. The simplest method to seeing a spirit is to have the spirit want to be seen by you. Spirits only choose to reveal themselves to interact with telepaths or to fight their enemies. Spirits can also be seen by those who know their names. A spirit can't hide itself from telepaths who have heard the spirit whisper its names to itself.

Spirits appear to exist mostly as psy energy. Although spirits can't be permanently killed, they will dissipate for a short period of time when their psy defenses fail. Lacking a solid form, most spirits have physical resistance, while more powerful spirits have physical immunity. Even though spirits are intangible, some spirits are able to engage in melee with their enemies using axes and spears. Like shadowlings, spirits have the ability to float. This gives spirits increased mobility in environments with water, lava, and deep crevices. Due to their special nature, many spirits have the unique ability to both suck and transfer psy energy. Spirits are predominantly affiliated with the Cold element, possibly because their deteriotated memory creates an absence of the personality factors of the other elements.

According to The Spirit Within, spirits may not be the minds of the departed, but rather, something created unconsciously by the telepaths themselves. A spirit is simply a telepath's internal mental processes manifesting externally. The telepath obsessed with violence conjures violent spirits. The lonely telepath conjures companion spirits. And when the telepath dies, so do the spirits that (he alone) sees."

Retrieved from "https://telepath.fandom.com/wiki/Spirit?oldid=16464"
Community content is available under CC-BY-SA unless otherwise noted.