Born as the eldest daughter of a poor shepard of the Rubat clan, Rahel was originally named "Nihira". At the age of 14, Nihira was arranged to marry Yusuf, the son of another, slightly wealthier, Rubat family. Both her father and fiancée were very abusive to her, so in the words of Rahel, she "did what any woman in her right mind would do: fled to the city of Ravinale, changed her name, and joined the local military academy", where she became a "star tactician". Rahel met Darime at Ravinale Military Academy where she bested him in a war game. After Ravinale's coup d'état, she and Darime founded the People's Resistance of Ravinale. Darime became the Resistance's figurehead and leader due to his charisma, while Rahel became the Resistance's tactician due to her brilliant, strategic mind. Darime, who was Rahel's romantic partner, was killed by General D'Kah in a duel which left Rahel in command of the Resistance. Because she couldn't think rationally due to her grief over Darime's death, she then gave up her command to Griffin.

A bowman and companion early on in the game, Rahel fights alongside Griffin and yourself, though severely reluctant at letting Duvalier join the Resistance. As she often reminds you and others, she does not agree with Griffin's decision to allow him to lead the party as a tactician.

Rahel is a remote-fighting character. She is able to attack multiple enemies at once with her Split Shot skills. Both Strength and Psy Power influence the damage of her Trueshaft and Split Shot 1&2 skills, making her an interesting choice economy-wise.

In addition, her Bow Counter passive skill can prove useful in some cases. If she learns Bow Counter, every attack in front of her coming from 2 spaces distance will result in her counterattacking.

Because Rahel is a bowman, she lacks melee attacks. It is wise to keep considerable distance between the enemy and Rahel. A common and simple strategy is: 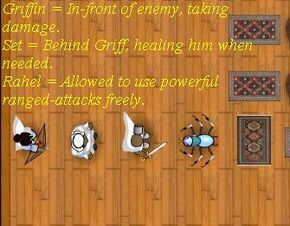 "Am I hearing this correctly? Are you seriously suggesting that we let someone with no leadership experience direct us in battle merely because he has the Sight? Why don't we just get a running start and throw ourselves onto their swords right now? It'll save everyone a lot of time and trouble."

"It's that knot of loyalty that ties the military to the people. Cygnus untied the knot by convincing our military's leaders that they had a higher duty. And so the faithful guardian dog of Ravinale turned and tore out its master's throat."

"I believe it's time to turn this sanctimonious windbag into a bristling, feathery pincushion."

Retrieved from "https://telepath.fandom.com/wiki/Rahel?oldid=17194"
Community content is available under CC-BY-SA unless otherwise noted.