Psy War is a mini-game in Telepath RPG 2. If the player buys Gamblin' Jack from Thallion, then Gamblin' Jack offers the player to play dice or cards- Psy War is the card game. The basic premise is to reduce the opponent's health to 0 by playing a simple "choose-one-card and see whose card is higher" principle (each card is assigned a number, and the difference in numbers is then subtracted from the loser's score). In addition, some cards can add to the player's HP (once only) or permanently increase the amount of damage each card deals- both these actions drain PsP, so there are also cards that give the player extra PsP to spend. Having higher extra attack points is often crucial to win the battle. If there is not enough PsP for the action on the card that gets played, then the action is simply wasted and the card is played at face value. The bet is 30 gold, however after Mission 4 each time you beat Gamblin' Jack, you get 50 gold. 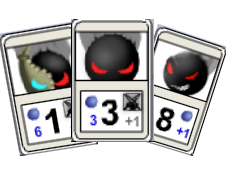 Retrieved from "https://telepath.fandom.com/wiki/Psy_War?oldid=16333"
Community content is available under CC-BY-SA unless otherwise noted.