Telepath RPG Wiki
Register
Don't have an account?
Sign In
Advertisement
in: Characters of Chapter 2, Teammates, Human,
and 5 more

Helena is a talented female Mechanic Captain who was thrown into the Bug Pit because she stole golem parts from the Mechanics.

Flint and Helena offer to help the Hero escape the Bug Pit if the Hero agree to give them part of the loot from killing the Bug Queen.

Helena is a terrific swordswoman. Her downfall: mobility, she's not as mobile as the shadowlings. She can learn Whirlwind later on, which allows her to attack enemies on all sides.

[She grins wickedly.] "What do you think we've been eating, pal? Only one thing down here besides rocks, and that's bugs. Cook bug meat a little over some lava, though, and it's not half bad."

"Hey Flint, we got some new parts! Hold still, now, so I don't break ya, you big galoot." [Flint blinks and makes a rumbling noise in his throat as Helena starts to install the new Saw on him.]

After the end of the Shadow War, Helena, along with Flint, go on to create a mercenary organisation to rival the Mechanics which she named "The Helenites". 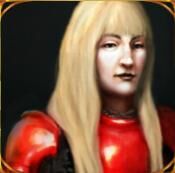