Telepath RPG Wiki
Register
Don't have an account?
Sign In
Advertisement
in: Characters of Chapter 2, Teammates, Golem,
and 3 more

Flint is a slow moving Stone Golem. Both Helena and he worked as part of the Mechanics, but they were caught stealing and were punished by being thrown into the Bug Pit. This implies certain doom.

After getting thrown into the bug pit, the Hero can speak with Helena. The Hero can get Helena and Flint to join the team for a price.

Flint may not seem as versatile as most characters, thanks to his lack of movement or good skills. However, you are able to equip him with powerful machines such as the Spin Saw. He can be very strong with those weapons. The Steam Engine is especially useful, since it can boost Flint's movement.

[The golem's eye fixates on you. He produces a series of grunts that sound like stone grinding against stone. You're not even sure if he's actually saying anything.] 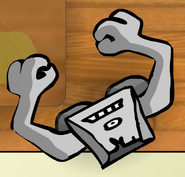 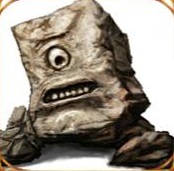